On July 30, 2019, the Japan-America Society of Kobe held the conference at Kobe Portopia Hotel and invited Ms. Karen Kelley, Consul General of the U.S. Consulate General Osaka-Kobe Japan.
About 30 people attended and promoted mutual friendship among the members of the society.

At the beginning, Mr. Oyama, the president of the Japan-America Society of Kobe gave a welcome speech and mentioned the importance of the good and strong relationship between Japan and the U.S., the history of the Japan-America Society of Kobe, and its recent activities.
In addition, he expressed his appreciation of the Consul General’s participation in the conference when she was so busy. 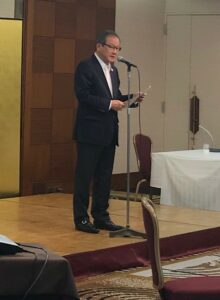 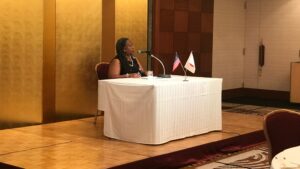 Prime Minister Abe’s travel to Washington in April, President Trump’s successful State visit to Japan as the first foreign leader of the Reiwa era, and a meeting with the newly-enthroned Emperor Naruhito in May, followed by the golf outings with the Prime Minister, the imperial banquet with the Emperor, and his meeting with family members of North Korean abductees, all showed the closeness of the relationship between Japan and the United States.
And only 30 days later President Trump visited Japan again to participate in the G20 Leaders’ Summit in Osaka with one of the largest delegations to participate in the Leaders’ Summit. At the G20 sessions, President Trump encouraged other countries to follow this path to promote economic growth and prosperity for citizens worldwide, urged leaders to invest in job training and workforce reskilling to meet the needs of high-demand industries, and addressed the need to promote economic opportunities for women around the world.

Our informal, grassroots ties such as the many friendship associations, sister city links, and volunteer-led exchanges are as strong as the ties that exist at the senior leadership level between the United States and Japan. Although the educational exchanges have successfully served the cause of mutual understanding and mutual appreciation between Americans and Japanese, we are worried about the decline in Japanese student enrollment in American colleges and universities.
The Tomodachi Initiative – a public-private partnership between the U.S.-Japan Council and the U.S. Embassy in Tokyo – is working to reverse that trend, promoting more than 50 educational and cultural exchange and leadership programs for Japanese and American youth across our countries. Encouraging the young people of Kobe to actively participate in such initiatives, as well as expanding your membership in the Japan-America Society of Kobe to include even more young leaders, would greatly impact the next generation of Japanese who will be responsible for maintaining our bilateral relations in the future.

■Proposing a Toast by Mr. Takahisa Kato, the Honorary and Chief Priest of Ikuta Shrine

And then, Mr. Takahisa Kato, the Honorary and Chief Priest of Ikuta Shrine, proposed a toast. He composed 3 tanka poems, and all the attendants renewed their determination to enhance the relationship between the two countries and drank a toast.

Here are the 3 tanka poems:
1. In the summer of the Reiwa era, Japan and the U.S. tighten their bonds and the Japan-America Society of Kobe prospers.
2. Consul General of the U.S. Consulate General gave a great speech and the relationship between the two countries deepens.
3. The Consul General and the President converse with each other and wish each other prosperity. 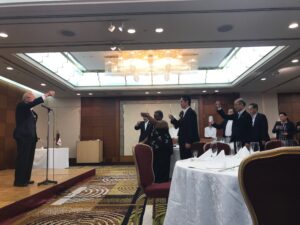 ■Report of the Activities of the Society

When the party was in full swing, 3 activities of the society were reported: the English Recitation Contest for High School Freshmen which is an annual event of the society; the Japan-America Grassroots Summit which is held every year alternately in Japan and the U.S.; the website of the Japan-America Society of Kobe which was newly established this year.
Notes:
The English Recitation Contest for High School Freshmen will also be held this year with the preliminary round in Nov., and the final round in Jan. next year.
Regarding the 29th Japan-America Grassroots Summit in Hyogo- Himeji Japan, please refer to the activity report page of the website.

Lastly, Mr. Shigeki Matsuda, one of the advisers of the society (the director and chairman of MANIX Co., Ltd. ) said a few words to close the conference and wished Mr. Oyama will make the society as prosperous as before. And the conference ended a great success. 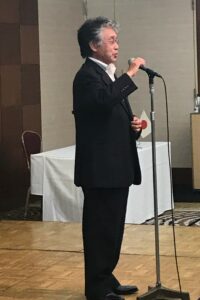 ■People at the conference 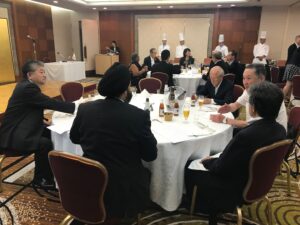 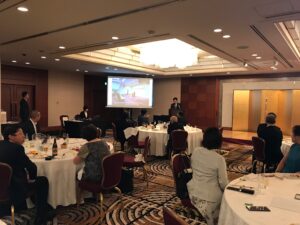 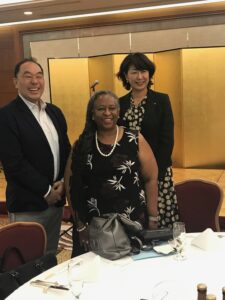 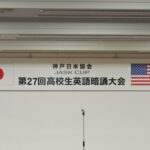