The 29th Japan-America Grassroots Summit 2019 in Hyogo-Himeji, Japan was held on Tuesday, June 25 through Monday, July 1. Motoi Oyama, the President of the Japan-America society in the host region, Japan-America Society of Kobe (JASK), acted as the Executive Committee Chairman for the event.

What is the Japan-America Grassroots Summit?

This summit is held in Japan and in America alternatingly each year for the purpose of interaction and mutual understanding between Japan and America. The 29th summit hosted about 90 U.S. citizens/students in Hyogo to have them experience interactions with residents or homestay in 10 cities within the prefecture.

The opening ceremony, as well as the reception were held in Himeji on Wednesday, June 26. Kiran S. Sethi (JASK Advisor) in place of Motoi Oyama, the JASK President and the Executive Committee Chairman for the event, Hideyasu Kiyomoto (Himeji City Mayor) and Masaharu Kohno (Chairman of John Manjiro Whitfield Commemorative Center for International Exchange) gave the welcome speech, while Masato Ayama (Chairperson of Himeji City Council) and Matthew C. Perry (a descendant of Commodore Perry) gave the guest speech.

The Start of Japan-America Relationship …

It is said that the Japan-America exchange first took place when John Manjiro was shipwrecked in 1841 and Mr. Whitfield, captain of a whaling ship “John Howland,” saved him. The highlight of the opening ceremony every year is the passing of a globe between descendants of both families. This year, the globe was handed over by Aya Nakahama, a descendant of John Manjiro, to Scott Whitfield, a descendant of Captain Whitfield. At the reception, Himeji City Mayor Mr. Kiyomoto gave a welcome speech first, followed by the sake barrel opening ceremony and a toast by US President of John Manjiro Whitfield Commemorative Center for International Exchange (CIE), James Kelly. Toshizo Ido, the Hyogo Prefectural Governor, also came to greet the participants. Performance by JUNSHIN Junior & Senior High School brass band and Imazaike Lion Dance Preservation Society livened up the event.

Each event demonstrated characteristics of each region. However, they seem to remember the most about their interactions with their host families.

After the 3-day homestay, as well as events and workshops in various areas, the delegates reconvened in the Main Hall at Awaji Yumebutai International Conference Center for a closing ceremony and reception on Sunday, June 30 in the afternoon. After Shigeki Matsuda (JASK Advisor) in place of the Executive Committee Chairman for the event, Norihisa Mizuguchi (Director General of International Affairs Bureau at Department of Industry and Labor, Hyogo Prefectural Government) and James Kelly (CIE-US President) gave their speech, all who participated in areal sessions got on stage to report on their activities. Finally, Kim Andrews, the Executive Director at Japan-America Society of Greater Philadelphia, where the 30th summit will be held next year, told us about appeals of Philadelphia and gave a welcome message before the ceremony ended.

Then the party moved on to the Grand Ballroom at The Westin Awaji Island, where the closing re-ception was held at 4:00 PM. A humorous, festive ningyo joruri (Japanese puppet theatre) program called “Ebisu-mai (Ebisu-puppet Dance)” was performed first, immediately turning the atmosphere happy. Then Kazuaki Araki, Hyogo Prefectural Vice-Governor, gave the opening remarks.

Next, Joji Yoshikuni, the Executive Advisor at John Manjiro Whitfield Commemorative Center for International Exchange, gave a toast that started the meal. When the party was at its peak, “Awaji Island Dance” was performed, climaxing the atmosphere while involving all the participants. All the participants seemed very satisfied. All events of the Japan-America Grassroots Summit that lasted for 5 days came to an end with a closing address given by Yoshiro Takai, the Chief Director of Hyogo International Association. 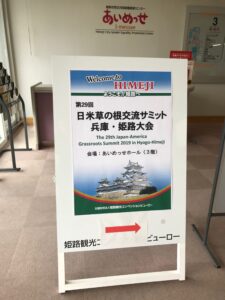 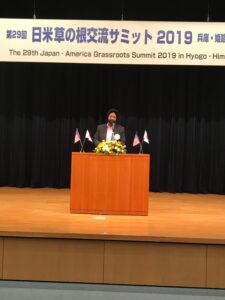 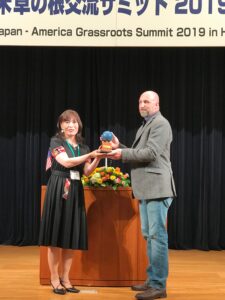 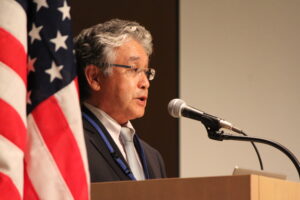 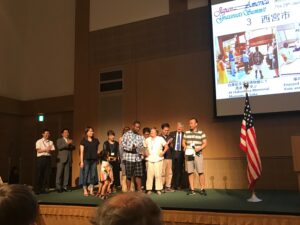 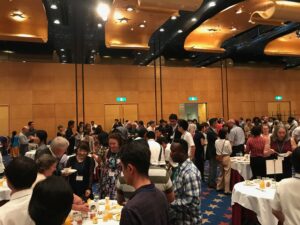 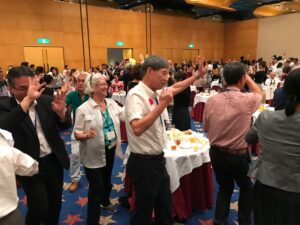 ★Japan-America Society of the State of Washington★ Join us for “Japanese Language Festival”! 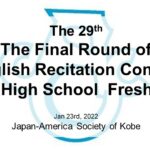