On May 26th, Soryoji Cafe (Consul General’s Cafe), hosted by the U.S. Consulate General Osaka-Kobe, was held, which included eight high school students who participated in an English Recitation Contest organized by the Japan-America Society of Kobe. Following last year, this is the second time this event has been held.

The event lasted about an hour and a half. The first half of the event started with an introduction by the U.S. Consulate General Osaka-Kobe, and the staff of the U.S. Consulate General Osaka-Kobe also talked about their experiences studying abroad in the U.S. In the second half, high school students introduced themselves and asked some questions in English.

During the talk about their experiences studying abroad, Consul Alicia Edwards (in charge of PR) and three other staff members told us what they learned, what were the challenges, and how they grew through these experiences. Consul gave us four pieces of advise to build a career globally – “take risks,” “take advantage of opportunities,” “find a role model,” and “have fun!”.

In the second half, students introduced themselves and their thoughts on studying abroad in English. Almost all of the students said they want to go

abroad to study English. In the Q&A session, they asked questions such as “what are the specific points of studying abroad in the U.S.?”; “What kind of scholarship can we apply for?”; “What are some tips for learning English?”; and “Are there any other skills which are good to acquire besides English?”. We could feel their enthusiasm towards studying abroad and learning English, and they had a meaningful discussion. Consul Alicia Edwards gave us a closing comment, and Soryoji Café ended positively again this year.

We hope this Cafe experience will trigger students to think further about their studies and future.

These are the URLs introduced by the U.S. Consulate General Osaka-Kobe during Soryoji Café: 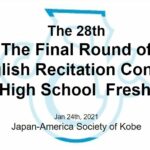 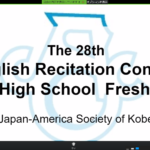